Find a program or service 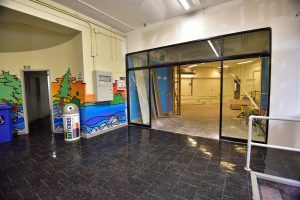 Like any construction project, the development of a new First Nations House has not been simple—there have been contractor issues; COVID-related delays; and structural challenges–horsehair walls, the wood framing that holds the windows had rotted out, and the glass itself had distorted and warped with age. Yet the project to turn a former historic dairy at 563 Spadina Avenue into a space to serve the needs and showcase the talents of U of T’s Indigenous students and staff is well under way, and should be completed early next year.

Prompted by the Answering the Call. Wecheehetowin. and the U of T Truth & Reconciliation 34 Calls to Action, renovations to provide appropriate space were begun. As reported in the U of T Office of Indigenous Initiatives Annual Report for 2020:

“The Indigenous Student Services at First Nations House (ISS/FNH) and the Centre for Indigenous Studies (CIS) are undergoing major renovations in the North Borden Building. The Resource Centre has been relocated within the third floor, and the main floor will feature an events/tutorial space shared between CIS and ISS/FNH, as well as dedicated office space for the Indigenous Students’ Association and the Indigenous Studies Students’ Union. CIS has also secured a classroom on the second floor of North Borden. These renovations provide an opportunity to create more accessible spaces, to update technology, and to improve event spaces within divisions.”

Michael D. White, Director, First Nations House — Indigenous Student Services, talked about the renovations and what they mean for U of T. There is more space available overall, he explained, with more natural light in those areas, and the student common area has been made accessible. There are new, separate work spaces, and a new lounge is dedicated space, which will mean staff and students “can do more things and different things.”

Thanks to the renovations, FNH will be able to host Indigenous counseling services with Health & Wellness, and to create a community of Indigenous scholars, Elders and traditional teachers, enhancing the capacity to explore Indigenous identity in different ways.

The kitchen, which White describes as “the beating heart of First Nations House,” has been updated with five new appliances, among other things. This will improve conditions for those working there, and make it easier for people to gather around food for celebrating all kinds of events, including Thanksgiving, in future years. White notes that food is an integral part of many First Nations gatherings.

FNH has collected, over its nearly 30 years of existence, artwork donated by students, alumni and others. With high ceilings and more natural light in the new space, they are now focusing on showcasing contemporary Indigenous art in the new space, including work by Chief Lady Bird, and Nyle Johnston, for example. And although murals have been a highlight in previous spaces, they plan to make future installations more portable.

There are outdoor spaces as well, FNH worked with The John H. Daniels Faculty of Architecture, Landscape, and Design to create ceremonial space in the north courtyard. On August 10, the space hosted the First Nations House Tipi Raising, a precursor to more ceremonial events to come. FNH has applied for a 365-day fire permit for the space, so that it can be used for ceremonial fires to honour different occasions as needed, in a timely way. Working with Daniels, Forestry, FNH is planning to set up a lodge in the space from November 1 -5 for Indigenous Education Week. It is being developed as an art installation—ultimately students will be able to use it creatively for art, education and cultural happenings.

In a poignant reuse of trees that were removed for construction and renovations in the area, two ceremonial tables, a boardroom table and a desk will be built to help furnish the space. White described sitting under a particular honey locust tree as a child, while his mother attended meetings with the Indigenous community, as part of the First Nations House offerings. At that time, he explains, “I could never see myself here, the status and wealth of U of T seemed unimaginable to me as an urban Indigenous youth.” Now that specific honey locust tree will furnish FNH for future generations of students and staff—including White’s own desk, as Director.

Some of that wood, he added, will provide harvest tables and stump seating in the north courtyard, eventually returning to the earth it came from. And on the front porch of the former dairy, formerly a place for ice cream, large pieces of furniture will be installed to encourage gathering and community.

U of T is starting to see expanded services at UTM and UTSC as well, says White, happy seeing the University commit to Indigenous spaces and to language revitalization.

Currently, FNH is serving Indigenous students by appointment or special request at 569 Spadina Ave, but early next year, they look forward to welcoming the U of T community to their renewed, dynamic space.